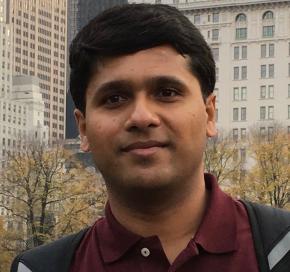 Congratulations to Prof. Santosh Nagarakatte, his Ph.D student David Menendez, and their collaborators Nuno Lopes and John Regehr! Their paper  "Provably Correct Peephole Optimizations with Alive" has been selected as the Communications of the ACM (CACM) Research Highlights paper.

CACM includes top quality research as the major component along the lines of magazines such as Science and Nature magazines. The CACM research highlights (CACM-RH) section is devoted to the most important research results published in Computer Science. Papers in this section are first nominated by an editorial board member or an ACM SIG selection committee, and then selected by a vote of the CACM-RH editorial board.  With a readership of almost 100,000 from over 100 countries --- and considering research highlights is one of the most-read section of the magazine --- publication in CACM-RH provides unmatched visibility and is regarded as a significant honor.

Prof. Santosh Nagarakatte and David Menendez's paper was published in the proceedings of the 2015 ACM SIGPLAN Conference on Programming Language Design and Implementation (PLDI).  It proposes the Alive domain specific language to write peephole optimizations in the context of the mainstream LLVM compiler and automatically verifies their correctness. It won the ACM SIGPLAN PLDI 2015 Distinguished Paper Award! It was subsequently selected as SIGPLAN Research Highlights paper and nominated to CACM-RH.